COLUMBUS, OH, SEPTEMBER 30, 2009:  A London, OH man will be smiling on his daily commute to downtown Columbus after winning the Improveit! Home Remodeling grand prize scooter drawing from the 2009 Ohio State Fair.

William Wallace purchased a helmet with jacket and registered for his temporary motorcycle endorsement after finding out he had won and before accepting the scooter at the home office of Improveit! in Columbus.

“I always thought about getting a scooter. With the price of oil going up I wanted something for my daily commute from London,” Wallace said and continued. “You [Improveit!] guys really came through for me.”

The 150cc silver SlingShot moped, adorned with Ohio State University emblems, was the main prize for visitors of the Improveit! exhibit at the fair. Improveit! is a home remodeling company serving most of Ohio specializing in one-day bath and shower systems, entry doors and windows, attic insulation, gutter protection, and insulated vinyl siding.

Improveit! also holds an annual prize drawing with a total retail value of $45,000 for 53 Ohio winners, the grand prize is a home makeover with a choice of improvements from the specialties of Improveit!. Residents of Ohio can register on the improveitusa.com website for the annual grand prize drawing. 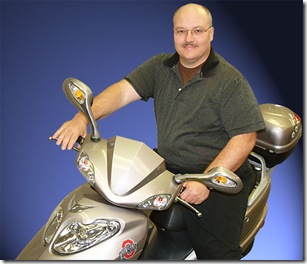 William Wallace, winner of the 2009 scooter drawing from the Ohio State Fair exhibit.

ABOUT IMPROVEIT! HOME REMODELING: Improveit! Home Remodeling of Ohio is a contractor & remodeler specializing in replacement windows, home insulation products, entry doors, gutter protection, 1-day bath and shower systems, and other home improvements. Improveit! is a nationally recognized home remodeling company well-regarded for setting a new standard of service excellence. The year 2009 marks the 20th Anniversary of services to the communities of Ohio with over 30,000 jobs sold in residential homes. The company is a recipient of Remodeling Magazine’s prestigious Big 50 award for excellence, Qualified Remodeler’s Top 500, and has won the Consumer’s Choice Award seven consecutive years with 13 separate awards. The company’s main websites are www.improveitusa.com, www.improveittogether.com, and www.improveitjobs.com. For more information contact Improveit! by email at info@improveitusa.com.