In the first article in this series we examined the spacer that separates the glass on a double pane window and keeps a seal on the air between. The spacer is an important element in the construction of a window, combined with the glass and gas between the glass, and the frame and you have the makings of a good window.

The properties of different glass and gas will determine its efficiency. The biggest battle to insulate your home will be won or lost through the glass because 80% of heat loss is due to conduction and radiation.

Conduction is the transfer of thermal energy. Argon filled windows reduces conductivity by its properties. Argon is more prevalent than carbon-dioxide, naturally occurring as a very small percentage in nature, behind Nitrogen and Oxygen which comprises 71% and 29% respectively of the gases we breath daily. Argon is separated out by distilling liquid air. It is plentiful, inexpensive and inert so is the most widely used gas in manufacturing windows.

Thermal radiation begins at a heat source, the sun, and is transmitted in all directions until it reaches the glass of a window. The emissive value of the material will determine the amount of thermal radiation is absorbed. The closer to a value of one from zero will determine its emissive value. Unglazed glass has an emissive value of .95, meaning that it absorbs most of the radiant energy and has a reflection property of .05. The reflection property is opposite of the emissive. Manufacturers of window glass reduce the emission properties in the glass by a coating or coatings to create Low Emissive glass, or Low-E glass.

Low-E glass reflects more of the infrared light so the heat on the inside is reflected back into the home in winter and reflected away from the home in summer. Infrared is not visible to the eye and what is allowed to pass through is the visible light so you may not even be aware there is low-E glass present. It works very efficiently and saves on energy costs. 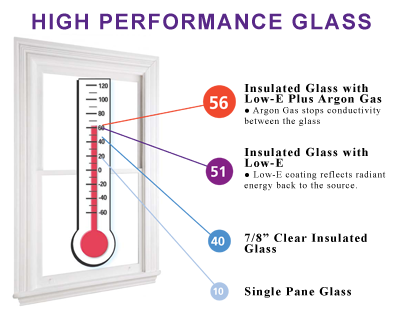