It may not look like it at first glance, but Josephine and Charles Wiseman were dealing with a dangerous set of problems in their Marion, OH shower. Installed to meet their aging-in-place needs in their newly built condo, the acrylic walk-in shower looked good from the outside, but had scary problems behind the walls.

Mrs. Wiseman says that shortly after moving in, she asked their homebuilder to install grab bars in the shower to give her and her husband more security. “All we had was a little soap dish to hang onto, and we didn’t feel safe at all,” she says. “Sometimes I would bring my walker into the shower with me just to have something else to hold on to.”

The builder informed the Wisemans that grab bars couldn’t be installed, which seemed strange. At that point, a number of problems surfaced, including an unsafe and uninsulated stud wall, and installation failures with the shower base. Thankfully, the Wisemans contacted ImproveIt who was able to make it right.

The inability to install grab bars in their shower was a red flag for the Wisemans. As it turned out, there was no blocking built up behind the shower to support grab bar installation. In fact, when experienced ImproveIt Installer Paul Gorgias took out the original shower, he discovered the situation was even worse. “The stud under the window had been removed and reinstalled flat using only 1-inch nails attached to the exterior sheathing,” he says. This modification was made to fit two niches molded into the old shower wall, but compromised the integrity of the wall itself. Additionally, Gorgias says insulation was missing from a large portion of the wall on either side of the altered stud, leaving the homeowners with nothing but the drywall and shower acrylic between them and a poorly built wall.

Gorgias worked diligently to repair the stud wall, reinsulate, adding blocking for grab bars and install greenboard on all three walls. This achieved a warm, secure wall, plus the waterproof shower installation ImproveIt is known for, while also providing the Wisemans with a shower that could accommodate their original request for grab bars.

The next step for Gorgias was to install the new shower base. The base for the old shower “was not glued or mortared to the slab,” he says, noting a significant amount of buckling was already occurring in the shower base because of the poor installation. “I could feel the base moving against the slab when it stepped into it.” This was incredibly dangerous for the Wisemans, who could easily have tripped or fallen because of the uneven shower floor. 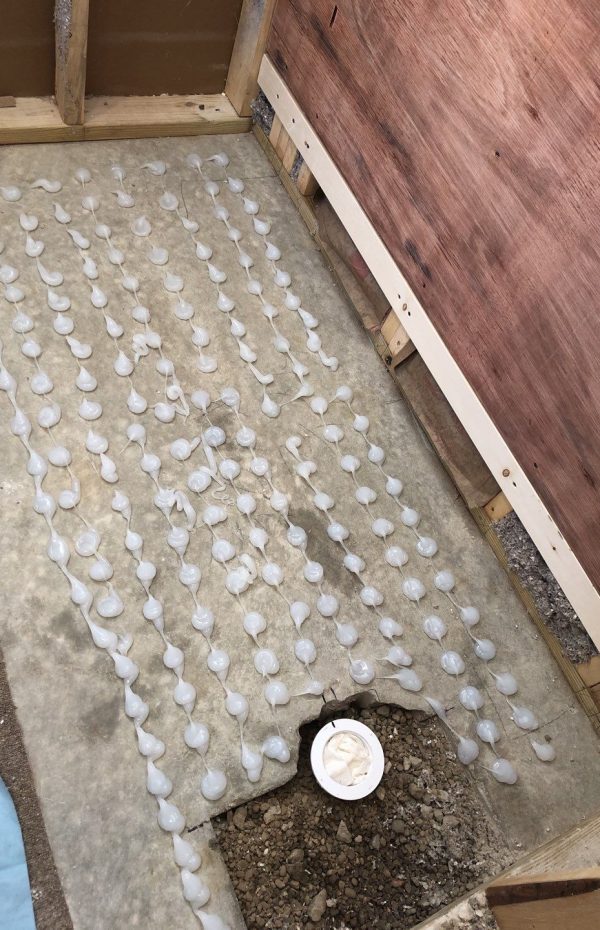 Moving forward with ImproveIt’s waterproof installation method, Gorgias fully adhered the new shower base to the slab with silicone adhesive, followed by the same process to install the shower walls. He completed the project by installing three grab bars exactly where the Wisemans needed them. Even with the wall repairs, ImproveIt’s grab bars with SecureMount anchor technology allows them to be for installed at any location or angle that works for the homeowner, so installation was completely customizable. Mrs. Wiseman says she’s pleased with all the work that was done.

We feel safe now,” she says, “and we recommended ImproveIt to our neighbor across the street who’s also thinking of putting in a new shower. We’re very happy.”

The ImproveIt team is so pleased to have been able to help the Wisemans with their bad contractor experience and provide them with an affordable walk-in shower that will help meet their aging-in-place needs. If you or a loved one is thinking of updating your bathroom with grab bars, benches, hand showers, or other aging in place accessories, reach out to ImproveIt today.