COLUMBUS, OH, MARCH 27, 2009:  Jimmie and Janet Moore had forgotten they had entered the 2008 Sweepstakes offered by one of Ohio’s largest home remodeling companies.

They had entered at a local Grossman’s early in the year then continued with their lives enjoying their family of two sons and daughter. It was a shock to the couple who lives outside of Grove City, Ohio when the announcement was made that they had won the grand prize.

“I was surprised, cause actually we forgot about it,” said Janet Moore. “I’m excited to get it.”

The product choices for the Home Makeover sweepstakes included a whole-house of window replacements,  a one-day bath or shower system, siding for their home, or leaf and debris free gutter system.  Janet was concerned about her husband being on a ladder on their 2 story home when she chose the leaf and debris free gutter system for their 100 year old home.

“A 71-year-old, gray-haired man should not be up there cleaning out the gutters,” grinned Janet.

Color Choice was the biggest decision that the Moore’s had to make. Improveit! offers a wide selection of colors and accessories,  they chose a complementing color that matched their existing vinyl siding. Recently celebrating their 50th wedding anniversary, they reflected on the past and realized they hadn’t won any prizes of value other than a television set 45 years ago. 2008 was the 11th year for the annual sweepstakes held by Improveit!. Additionally, 53 winners were awarded other home improvement projects.

Entries are made online at www.improveitusa.com or in selected Ohio retail stores.  Improveit!  is celebrating 20 years in the home remodeling business as one of the largest in Ohio with over 30,000 sold jobs in residential homes. Improveit!  has been honored to receive the Consumer’s Choice Award for business excellence seven consecutive years with 13 separate awards.

ABOUT IMPROVEIT! HOME REMODELING: Improveit!  Home Remodeling is a remodeling contractor specializing in replacement windows, home insulation products, entry doors, Leaf and Debris free gutter systems, 1-day bath and shower systems, and other home improvements. Improveit! is a nationally recognized home remodeling company well-regarded for setting a new standard of service excellence. The year 2009 marks the 20th Anniversary of services to the communities of Ohio, with over 30,000 sold jobs to residential homes. The company is a recipient of Remodeling Magazine’s prestigious Big 50 award for excellence, Qualified Remodeler’s Top 500, and has won the Consumer’s Choice Award seven consecutive years with 13 separate awards. The company’s main websites are www.improveitusa.com and  www.improveit2green.com. For more information contact Improveit!  by email at info@improveitusa.com or by toll-free number at 1(800) ROOM NOW, (800) 766-6669. 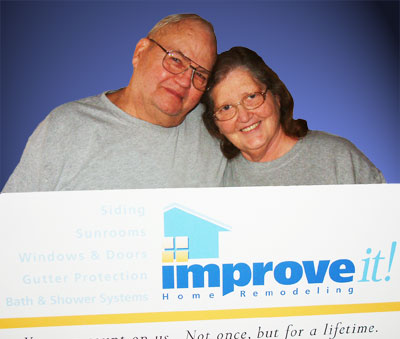